A recent report from AsiaNews shares the story of Lazara Digal, a believer whose father -- a pastor -- was brutally murdered in Orissa, India. Please read his story and remember Lazara and believers like him in prayer, as they  continue to face daily challenges. The following is an excerpt from the article: 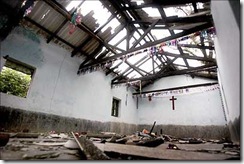 "During the last wave of anti-Christian violence, Hindu fanatics first destroyed the church in our village, then burned the houses of Christians and completely destroyed by fire whatever was inside. Then they started to look for us Christians to kill us. To save ourselves and we had to flee to the forest and the hills and remain hidden.

"We stayed in hiding for 10 days…without food beneath pouring rain. There were about 20 families, we could only cry and pray to God[.] After 10 days we learned that the police had arrived. Then we came back. The police assured us that they would protect us if we returned to the village. In the houses in the village there was nothing left, not even enough rice to eat, we could not resume our normal work. So many we decided to go to Bhunaneswar or Cuttack, to find work and earn a living. But our parents stayed behind in the village.

"On June 4, 2009 my father, the pastor Biswanath Digal, along with the Christian Prasanth Digal, went by motorcycle to Phulbani, about 14 kilometers from Ladapadar. Having done their work and some shopping, at 7 pm they were returning home. But some Hindu extremists had noticed them and a group of 40 or 50 was waiting for them, armed with sticks and axes. When the two Christians were in Minia, near the forest of Pidiakali, the group jumped out and stopped them. They were drunk, they insulted them and started to hit them with sticks, shouting Jai Sri Ram and Jai Bajrang Bali ki Jai! 'Kill the shepherd, so other Ladapadar Christians will become Hindus.' They were beaten unconscious. Thinking they were dead, they left them there. They remained there for 2-3 hours before a traveller saw them and informed the police of Bisipadar.

"The police took them to hospital in the district of Phulbani. After two days of treatment, my father still had not regained consciousness. Since we had no money to pay, on the advice of doctors we took him to the hospital in Cuttack, on June 7. For days I took care of him, without any result. In the end the doctors said to take him home. But we had no house, because it was destroyed by Hindu fanatics.

"On 19 June we brought him to a relative low in districts of Bhubaneswar. He died June 23, without ever having regained consciousness. We returned to our village and buried him there. My mother suffered a stroke from the loss. She can not walk."

When I travelled to Orissa, India last fall, I heard many similar stories of heartbreak and loss. Many believers, like Lazara, had their loved ones killed and their homes destroyed in violent attacks. Some of the believers I spoke with had much difficulty in understanding or expressing the terrible things they experienced. One young woman in particular comes to mind. She was heavily pregnant when she had to flee her home during an outbreak of anti-Christian violence in 2008 (click here for more). When the time came to deliver, her baby daughter was born dead. Unable to speak about her horrific experience, her story was shared instead by her mother-in-law. I can clearly remember her vacant eyes as she listened to her story and relived the devastating loss of her baby.

At the upcoming VOMC Persecuted Church Prayer Conferences this March, guest speaker Rev. Sudhakar Mondithoka -- Director of the Hyderabad Institute of Theology and Apologetics and VOMC partner -- will be sharing about the persecution occurring in Orissa and other parts of India. To find out more about the upcoming conferences, check out the conference brochure.