On my commute home yesterday, I listened to a fascinating podcast of an interview with Barbara Demick, an award-winning journalist who recently authored the book Nothing to Envy: Ordinary Lives in North Korea. It seems to be a book that, although not specifically focused on the situation facing Christians in North Korea, would greatly enrich its reader’s understanding of the environment there, including the incredible and horrific control exercised by the totalitarian regime. 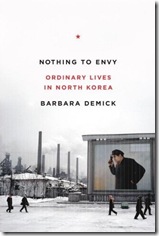 The book follows six North Koreans over fifteen years. I get the impression from Demick’s interview that she had a special vision for bringing the everyday details of these people to life, from the ins and outs of their home lives to the intricate details of their personal relationships. Amazon’s description notes the intimate and attentive nature of the book by stating that “Through meticulous and sensitive reporting, we see the six subjects—average North Korean citizens—fall in love, raise families, nurture ambitions, and struggle for survival.”

The Amazon listing also notes that “One by one, we experience the moments when [these six people] realize that their government has betrayed them.” I am sure that such moments of awakening must vary from person to person, with some experiencing dramatic realizations about the falsity of their environment while others are slowly worn down by doubts and questions until the deception is finally and fully sloughed off.

For me, a highlight of the interview was Demick’s story about a man whose loyalty to North Korea was shaken by mere minutes of a South Korean radio show. The content of the show? Nothing but a simple comedy routine about two women arguing over a parking space. Doesn’t sound like life altering material. And yet, it was enough to spark curiosity in this man’s heart and mind about what he had heard about the world outside North Korea's walls. Since cars are virtually nonexistent in North Korea, he was astounded to hear of a place so filled with vehicles that people actually fought for a parking space. In fact, his first reaction was to dismiss the show as some kind of ridiculous satire. However, this seemingly small exposure to the outside world eventually ate away at his faith in the alleged supremacy of the country and his loyalty to its government. He defected but a few years later.

If a brief clip from a radio comedy is enough set a in motion this man’s journey into truth, just think of the effect that God’s Word can have on the long deceived and oppressed souls in North Korea. I felt reinvigorated to prayerfully intercede for my North Korean brothers and sisters. I was also reminded of those working to spread the gospel in North Korea, including VOMC partners involved in deploying gospel balloon into the country. These faithful workers are in need of fervent prayer support as well; their work can be difficult, complicated and dangerous due to obvious security concerns.

In VOMC’s March newsletter, which focuses on North Korea, we included an excerpt of a testimony placed inside gospel balloons deployed by our sister mission. You can download this testimony along with several others here. They are powerful testaments to the Lord’s ability to reach even those in the most corrupt and oppressive environments with his extraordinary grace. 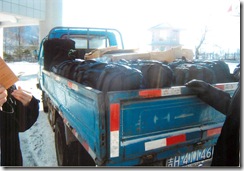 Also, we are planning to soon share in our newsletter about our 2009 Christmas Blessing project, through which many North Korean Christians received gift packages containing such vital necessities as rice, clothing, vitamins and Bibles (the picture above is of some packages being distributed). So if you are a subscriber you can watch for that in upcoming months. It was a special opportunity for Canadian believers to reach out and show their love and support to their suffering North Korean family.