Have you heard about the four Christians who were arrested this past Friday in Michigan? According to CBN, the Christians “were arrested June 18 and charged with disorderly conduct at the Dearborn Arab International Festival in Michigan while trying to share their faith with Muslims. The festival drew an estimated 300,000 people over three days. Authorities said they are not taking any sides and must keep the peace at a festival due to the large crowd. Christian proselytizing at the festival has been a matter of dispute for several years. The evangelists, who are free on bond, insist they only spoke with people who wanted to speak with them.”

For footage of the event and interviews with those arrested, watch the video below. And, as always, we would love to hear your comments and reactions! 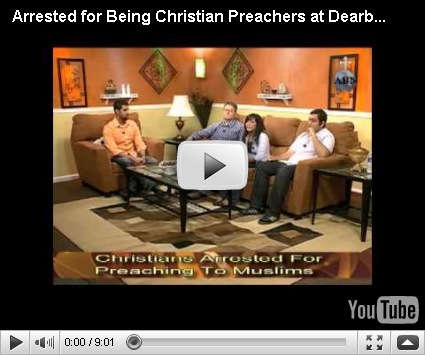