In mailboxes this week 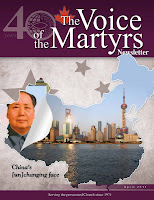 The April issue of The Voice of the Martyrs newsletter is hitting mailboxes this week.