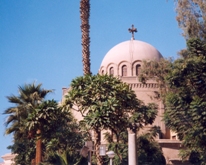 Thousands of Muslims protested the reopening of the St. Mary and St. Abraham Church in the Cairo neighbourhood of Ain Shams on May 19, reports Assyrian International News Agency.
The church was forced to close in 2008 because of severe protests occurring against Christians. When the church attempted to reopen, the priests were met with the same protests and violence.

Muslims are protesting the church's dome and cross, which reportedly violate the Muslim custom of "dhimmitude." The custom considers displays of faith by religious minorities to be intolerable.

Eight Coptic Christians were arrested and charged with rioting and violence, three of whom have been sentenced to five years in prison for firearms and weapons possession. Although these three maintain that the evidence was planted, their criminal charges remain. Conversely, the three Muslims arrested during the riots were released.

You can help by praying!