Your prayers and letters make a difference! 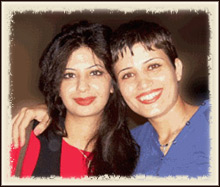 In March 2009, Christian roommates Maryam Rustampoor, 29, and Marzieh Amirizadeh, 32, were charged by the Iranian state with being "anti-government activists." They spent 259 days in Tehran's notorious Evin prison before being released in November 2009.
Our sister mission in the United States recently posted their first interview since their release. The pair discussed their life in prison with Sam Yeghnazar of Elam Ministries.

Take a few moments to read the transcript and be encouraged. Your letters and prayers DO make a difference!