By VOM-Canada’s sister mission in the UK, Release International

It is estimated that there are only some 30,000 Somali Christians, with most living outside the country. To be a Christian in Somalia is to live under constant threat. Certain groups in Somalia, such as the militant organisation Al-Shabaab, are committed to killing any Somali who abandons Islam to become a Christian.

The threat to Somali Christians outside Somalia is still a reality, particularly in neighbouring Kenya, Djibouti, parts of Ethiopia and some other African countries.

“John” was to be my companion and “taxi driver” during this trip to Kenya and he very quickly became a special friend. You could relax when you were with John, confident that he knew his way around.

As he spoke about Somalia and the ongoing violence I was able to understand and identify with some of the things he said: I myself had grown up through the Troubles in Northern Ireland.

But when he presented me with a copy of a fatwa that had been sent to him declaring that he was to be hunted down and killed because of his Christian faith and his involvement in Christian ministry, I was saddened and staggered at the blind hatred and brutality expressed in the text. John just smiled and said he had been threatened like this on many occasions. 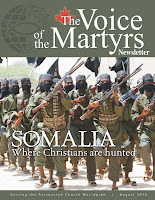 I discovered that he frequently had to move house and change the route he travels in and out of the city. I found out that he loves Somalia and the Somali people and that he longs to meet the right Christian girl, get married and start a family.

Spending time with John opened my heart, it changed my attitude to Somalia and it helped me to see something of God’s love for Somali people.

To learn more about God’s love for Somali people, contact our office to request a free copy of The Voice of the Martyrs August Newsletter.