Pray for Nigeria this November

Every year, Christians in more than 130 countries join together in prayer for our persecuted brothers and sisters through the International Day of Prayer for the Persecuted Church (IDOP). This year, IDOP falls on Sunday, November 4, 2012.

To help you, your family, or your congregation join in this worldwide prayer movement, IDOP Canada prepares a kit with testimonies, videos, specific prayer points, and more. The following story is included with this year’s kit.

We look forward to joining with you in prayer this November!

Fatu and her husband, Pastor Kallah, were enjoying time with friends in their home when they heard a commotion outside. A mother of nine children and grandmother of seven, Fatu went to the door with her husband and friends, curious to see what was happening out in the streets of Gombe. 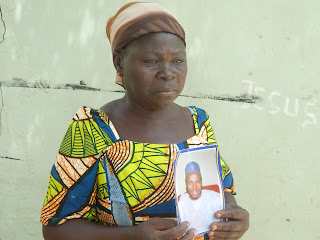 It was April of 2011, and Nigeria had just re-elected President Goodluck Jonathan, who was a Christian. But many did not accept the results, especially militant Muslims. A Christian worker in Nigeria shared at the time, “Just this morning we woke up to the fresh news of attacks on Christians... across Kaduna [state]. Many churches, Christian houses, and properties are now on fire…. The fear of Muslims is that they do not want a Christian governor and President in Nigeria. Even before now, it has been rumoured that, if the People Democratic Party wins the election, they will not accept the result and that Christians should be ready to pay the price….”

Fatu and her husband were among those Christians who would pay the price.

When they looked out the door, they saw Muslim youths in the streets, breaking windows in their neighbourhood. When they reached Fatu’s home, they broke in the door and forced their way in. Fatu urged her husband to flee because he was outnumbered, but he refused and chose to confront the young rioters. “Why are you after me?” he asked them.

“We want to kill you because you are an infidel,” they replied.

“To God be the glory,” he told them as he raised his hands. “If you say you want to kill me, I am ready.”

The attackers responded by striking his head with an ax. He fell to the ground and died immediately. Fatu watched the horror unfold before her eyes.

Yet, instead of being bitter and inconsolable, she shared, “If I am able to endure like him, that will comfort me.” She has also chosen to forgive her husband’s murderers because she says they don’t know what they do.