In mailboxes this week! 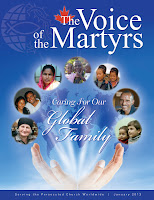 Look for the January issue of The Voice of the Martyrs newsletter in your mailbox this week!


Caring for our Global Family
In this issue, you will meet several members of our global family who are overcoming the challenges of persecution, thanks to the assistance, provision and spiritual encouragement provided by VOM – including all who partner with this vital ministry.