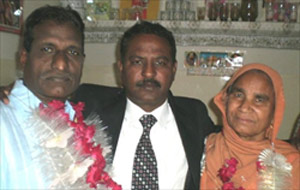 In a surprising ruling on January 28th, a judge serving the Punjab province court of law threw out charges of blasphemy against Christian convert, Barkat Masih, who was accused of insulting Islam. The ruling came two months after similar charges were dismissed against Rimsha Masih, the teenage girl whose case attracted worldwide criticism of Pakistan's anti-blasphemy laws. (For a past report on Rimsha's case, click here.)

In September of 2011, an incident took place at a Hindu shrine in Barkat's native village of Khairpur Tamewali. (This particular shrine happens to be located on two acres of land which has remained in Barkat's family for generations.) It all began when two frequent visitors to the shrine deliberately started an altercation with him, alleging that he had spoken badly against the Muslim prophet. Following a complaint filed by the two accusers, police arrested and charged Barkat on October 1st. Penalties for blasphemy offences can include life imprisonment or death.

While awaiting trial, Barkat was incarcerated for almost 16 months. During that time, a total of 25 people submitted affidavits in Barkat's favour, defending his innocence. A further investigation revealed that the two shrine visitors had actually plotted to take over Barkat's land and, therefore, implicated him in a false case. Since the accusers were unable to produce any evidence to the contrary, the blasphemy charge was dismissed. "I didn't think God would rescue me from such an impossible situation," explains 56-year-old Barkat after hearing the judgement, "but my miraculous rescue has strengthened my faith in Him."

Due to threats from those in his village, Barkat and his family will have to relocate. Even Judge Chaudhry Jamil Ahmad, who has taken an indefinite leave of absence since the trial, understands the dangers of challenging Pakistan's deep-rooted sensitivity about criticism of Islam. To learn more about what believers are facing in Pakistan, check the Pakistan Country Report.

We can rejoice over the fact that justice has prevailed in both of the above mentioned cases. First, let's thank our Heavenly Father for answering prayer on behalf of Barkat and Rimsha by bringing vindication to them in the courts. Continue to pray not only for the protection of these believers and their families, but also for those who have dared enough to defend their cause and uphold justice amid opposition. May God's wisdom illuminate the minds of all who are representing Pakistan's judicial system, bringing about further positive change that will greatly impact all of its citizens.