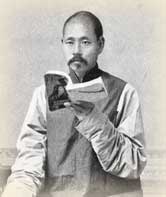 The following was written by Dan Graves for Christianity.com.

“Our missionaries have remained with us; we will stand by them, and live or die together." Meng Ch'ang-ch'un and the other Chinese pastors at Pao-ting Fu were united in their determination. The Boxer Rebellion, an angry reaction against western interference in China, raged across China. The government encouraged lawless bands to kill all foreigners and those who had adopted their ways, especially Christians. Thousands of people died.

Meng was a direct descendant of the famous Chinese philosopher Confucius. He was attending a conference in T'ung Chow when the news came that the Boxers had destroyed the railroad to Pao-ting Fu and cut communications. Meng could have fled to nearby Peking where foreign embassies offered some protection; many other Christians did. But he remembered the missionaries who remained behind. It seemed to him that his honor as a Chinese called him to Pao-ting Fu.

Immediately, he began walking home to certain death. It was a four day trek through Boxer hordes, but somehow he arrived safely. Back in Pao-ting Fu, he took up his daily tasks and preached as always. But now he added to his routine the extra burden of sending rank and file Christians to safety.

He sent his fifteen year old son away, too. The boy pleaded to be allowed to remain and face the danger – even death – with his dad, but Meng reminded him that the family would have no one left to testify about Jesus if both of them were captured and killed. Reluctantly the boy obeyed.

On this day, Friday June 29, 1900, the Boxers seized Meng. They tied his hands behind his back, dragged him to their heathen altar and lopped off his head. His head was put up for everyone to see as if he were a notorious criminal, but his body was flung into a ditch behind the temple.

The Boxers killed many other Christians at Pao-ting Fu the next day. These included both Chinese nationals and foreigners.

Six months later, Meng's body was was dug up and his head and body buried properly together. Early the next year, after the trouble had died down, the city of Pao-ting Fu held a great memorial service for the martyrs. More than half of the banners were in honor of Meng.